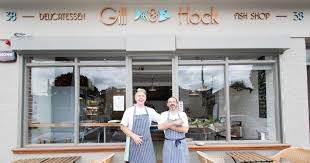 The Garden Convivium held their annual dinner at Gill & Hock at Baker’s Corner on Tuesday 11 February 2020.  The dinner was also held to celebrate 30 years of Slow Food.  Stephen Caviston and his team produced a truly memorable meal for us.  We started with a cocktail of vodka, cranberry juice and Prosecco just to get the juices flowing.

Paul Fahy, one of ou

r members, kindly provided us with some wild game birds from his freezer that he had shot during the season. I adapted a River Cottage recipe to make a Wild Game Bird Terrine which Stephen served with sourdough bread, the starter of which, Daniel, Stephen’s co-chef, had received from Boudin Bakery in San Francisco, the home of the original sourdough starter. It was so light.  This was followed by Prawn Cerviche, with the spices and lime acting as a great palate cleanser.

Daniel then prepared Mussels in a mild curried sauce with slightly crunchy vegetables.

We were then treated to a melt-in-the-mouth Oxtail stew/soup. The broth or sauce was shiny and dense with flavour.  Next, the main course. Roast Loin of Gloucester Old Spot Pork with Apple Sauce, Roasted Root Vegetables and Goose Fat Potatoes.  Finally, the dessert, a Chocolate and Orange Ganache Tart with Orange Cream.

A big thank you to Stephen and Daniel, to Vinny who had helped with the preparation during the day and to Carla our wonderful waitress.

Also a big thank you to our secret wine supplier.