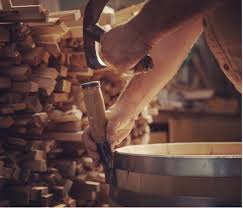 On Thursday 14 March, Slow Food East Cork hosted Ger Buckley, of Midleton Distillery, who is a fifth generation cooper whose family have been making barrels for over 200 years
Ger demonstrated his craft using ancient tools he still uses today. Below is a brief report on that event.

Irish Distillers’ Master Cooper Ger Buckley is a fifth generation Midleton cooper whose family have been making barrels for over 200 years. His passion stems not only from his family’s lineage, but also from his fascination with the wonderful wood he uses and the forests where they are grown. As one of the country’s last coopers, Ger has taken on an apprentice to protect this time-honoured skill and pass it on to the next generation. This ancient craft and skill, dating back thousands of years was expertly demonstrated by Ger, using barrels and the ancient tools that he still uses today. We were all fascinated by his precious tools, some of which have been handed down through the generations of his family, the skill with which he uses them and the fascinating names of each.