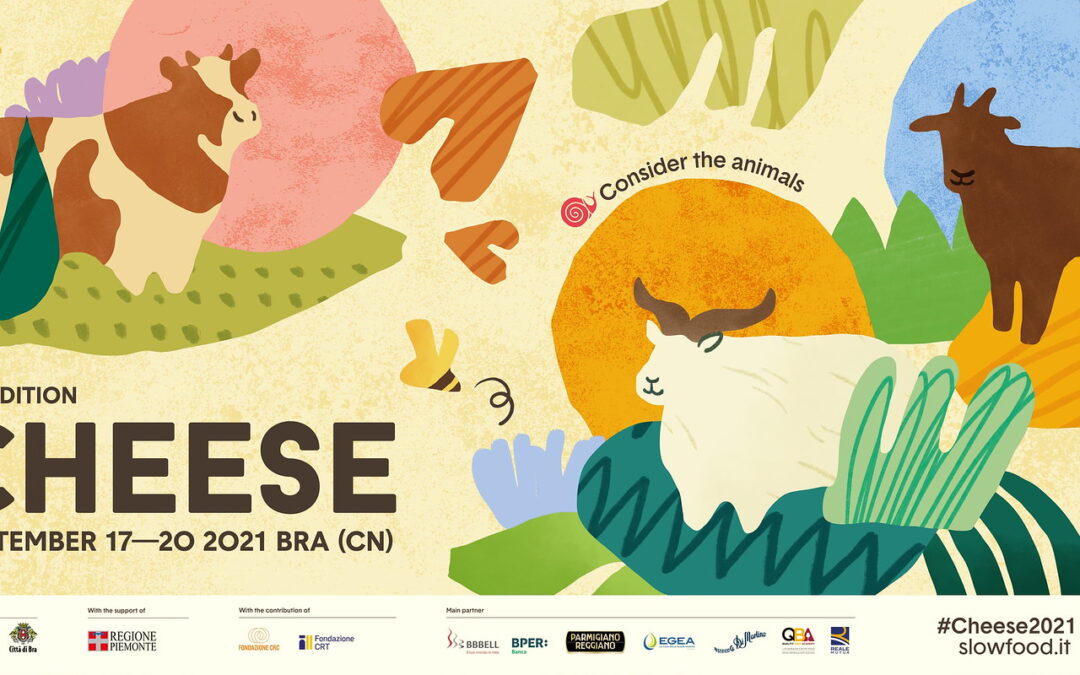 Slow Food HQ, August 31 – The organization of Cheese 2021, to be held in Bra, Italy, from September 17 to 20, is now in its final phase. Despite the challenges caused by the evolving health situation, the biennial event’s organizers, the City of Bra and Slow Food, are ready to welcome all those diverse participants—members of the public, cheesemakers, farmers, affineurs, dairy experts, who, since the first edition in 1997 have ensured its success and worldwide renown.

This year, the priority is of course ensuring everyone’s safety, which means that in line with current regulations, all activities at Cheese 2021 will be accessible only to visitors in possession of a Digital COVID Certificate (also known in Italy as the Green Pass). These rules follow the measures taken by the Italian government to contain the Covid-19 pandemic, and as such are subject to change based on government announcements. Any updates will be posted on the website.

The heart of the event, the Market, hosts the very finest products from cheesemakers, herders, cheesemongers and affineurs from around the world. The cheeses on sale, whether cow’s, sheep’s or goat’s milk, will all have been made exclusively with raw milk from farms attentive to animal welfare, consistent with the Slow Food philosophy and the campaign that has defined Cheese since its first edition. This will be particularly evident at Cheese 2021, in line with the theme of this year’s edition: “Consider the Animals.” Different approaches to this issue will be explored during the event, with the Market naturally reflecting a more practical perspective. As during previous editions, exhibitors from Italy and beyond were keen to participate in the world’s most important event dedicated to natural cheeses. Pandemic-related uncertainties have been overcome by a strong desire to come together, to once again be able to exchange experiences and knowledge and interact with the enthusiastic public for which Cheese is known. Producers, cheesemakers and affineurs from across the host city’s local region of Piedmont were particularly keen to attend, with the crown jewels represented by the Slow Food Presidia: Coazze Cevrin, Saras del Fen, Macagn, Mountain Pasture Castelmagno and Toumin dal Mel. The Region of Piedmont’s extensive official stand will also be a key hub for the event, a place to learn about the historic Alpine PDOs and new projects being launched in the cheese and dairy sector. But these are just the tip of the iceberg: hundreds of other stalls will be displaying caciocavallo from the south of Italy, toma from the Alps, pungent blues and creamy goat’s cheeses from across the peninsula.

The Irish Raw Milk Cheese Presidia will also be present.

The affineurs present will include Pascual Cabaño from Spain, with his prized Rey Silo cheeses, and the Slow Food Cammino de Santiago Community, which will be presenting cheeses from the Asturian tradition as well as cider, honey and jams. Spain will also be represented by Poncelet from Madrid, with over 150 varieties of cheese, and Queseria Cultivo with its Isla Corazon. Among the French affineurs will be Joseph Paccard, whose family has been selecting raw-milk farmhouse cheeses, including the historic Reblochon, since 1990, and Marcel Petite with his Comté Fort St Antoine. Germany, Belgium, Switzerland, Sweden and Portugal will also be represented, in addition to the Italians, of course, who will include the ever-present Guffanti and Giandomenico Negro, who will bring the results of his surprising aging experiments. Matteo Villa will also be showcasing the best tomas from Valchiusella, Orco and Soana, produced with raw milk from Valle d’Aosta’s Pezzata Rossa cows.

Cheese would not be Cheese without the presence of the world’s greatest natural cheese, Parmigiano Reggiano, which will be represented by its Consorzio di Tutela and by dozens of producers. Particularly worthy of note is the Presidium stand offering Parmigiano made from milk from the White Modenese Cow, a breed whose numbers have fallen from 140,000 in the 1950s to just a few hundred today.

Among Italy’s other traditional cheeses, the pecorinos, made with sheep’s milk, are also held in high regard, whether Tuscany’s Maremma Raw Milk Pecorino, the Shepherds’ Fiore Sardo made across the Tyrrhenian Sea in Sardinia, a cheese firmly rooted in the island’s millennia of agropastoral tradition, or Ittiri Fresa Cheese, also from Sardinia. From the far south of Italy we have the producers of Basilicata Caciocavallo Podolico and Belice Valley Vastedda from Sicily.

For a complete tour of Italy without leaving Bra, the official regional stands at Cheese 2021 can’t be missed. As well as that of Piedmont, other guests will include nearby Valle d’Aosta and Friuli-Venezia Giulia, showcasing local producers committed to sustainability and the exclusive use of raw milk. Puglia’s regional stand will share the story of the seasonal migration of livestock, in collaboration with Slow Food Puglia, and the region will also be represented by the Alta Murgia Park. From Central Italy we have Umbria and the Comune di Gualdo Tadino, while Slow Food Sicily will not only be hosting an official space for activities and tastings but has also supported the presence of the Slow Food Presidia from the region and other Sicilian producers.

Cheese 2021 is organized by the City of Bra and Slow Food. The event has been made possible by the support of companies who believe in the values and objectives of the event, including the Main Partners: BBBell, BPER Banca, Consorzio del Parmigiano Reggiano, Egea, Pastificio Di Martino, Quality Beer Academy (QBA) and Reale Mutua.