“Chefs have a role to play in fighting the climate crisis”: the message of the Slow Food Cooks’ Alliance gathering in Bologna 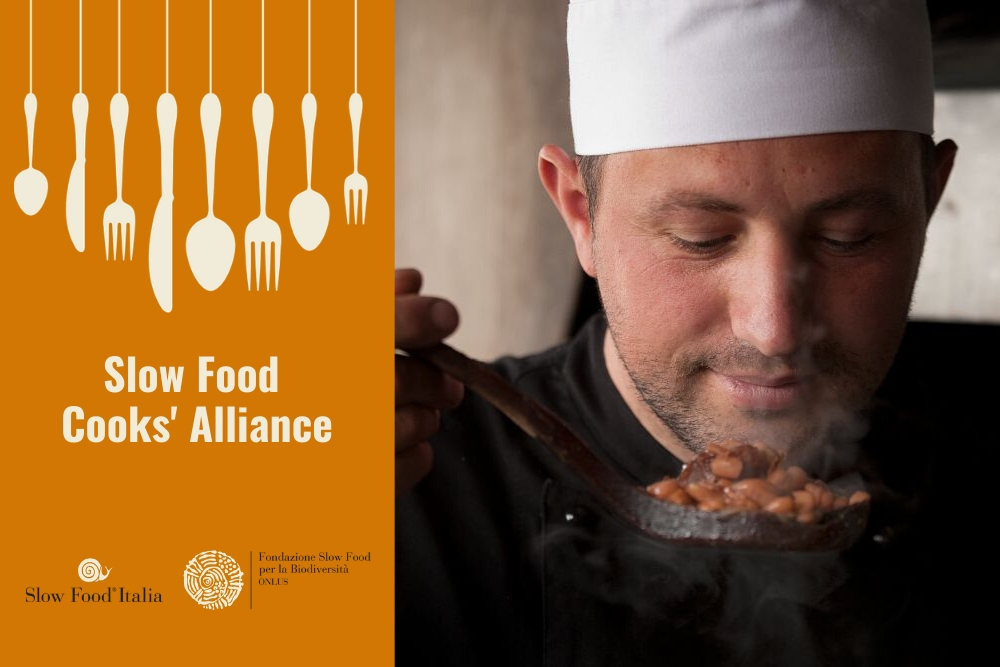 More than 100 participants gathered on November 17 and 18 to celebrate 10 years of the Slow Food Cooks’ Alliance in Italy, the first country to develop this network which seeks to unite cooks with small-scale producers who preserve biodiversity.

The cooks took the occasion to jointly affirm that a new Alliance is needed, where cooks and chefs are committed activists whose strong choices contribute to resolving the epochal challenges of our changing world.

It is not just industry, transport, energy production from fossil fuels and farming that produce green-house gases; even the simple activity of preparing meals produces emissions, whether at home, in a restaurant, in a school cafeteria or in a company canteen. Making sustainable choices in the kitchen and the dining room can significantly reduce CO2 emissions and therefore help in the fight against climate change.

After a series of analyses carried out on the emissions of agricultural production, in 2019 Slow Food decided to focus its attention on restaurants, with technical support from INDACO2 (a sustainability and environmental communications consultancy), convinced that conscious and virtuous choices can make a significant contribution to reducing climate impacts in this context.

To this end, a study has compared the impact of Les Résistants, a restaurant in Paris working in harmony with the Slow Food philosophy, with conventional restaurant models.

In the first case (comparison with a conventional restaurant with a similar menu), the impact of Les Résistants is 50% less than the restaurant using “conventional” suppliers. The comparison is even more striking – 4.5 times less impact! – when the comparison is made with a conventional restaurant with a less “climate-friendly” menu, in other words with a greater number of dishes based on meat or dairy (as is the case in many restaurants) and that does not pay any attention to avoiding food waste or to limiting energy use.

The study shows how a restaurant’s sustainability is conditioned by careful ingredient selection, which must be produced according to virtuous agricultural practices. This aspect is much more important in determining the environmental impact than the distances traveled by individual products. The concepts of a short supply chain and zero food miles, particularly within the context of large cities, have relative value. In the case of Les Résistants, their suppliers are all over the country, but good logistical organization and a zero-waste policy have a significant influence on limiting their environmental impact.

The owner of Les Résistants, Florent Piard, spoke at the assembly on the theme of “serving up care for the climate—sustainability in restaurants is possible”, explaining the reasons behind his organizational choices.

“Perhaps because of my Norman origins I have always been attracted by farmers and the countryside. I studied both deeply, going to visit all kinds of farms for over a year, before opening my restaurant. My aim was to create a sustainable business and to restore a healthy relationship between countryside and city that respects and values the work of farmers. I also wanted to be able to provide quality gastronomy and ensure a decent economic performance,” says Florent. “To meet all these requirements, I studied the products and the supply chain logistics, then implemented the solutions described in the study. I’m very happy with the conclusions reached by the Indaco2 study commissioned by Slow Food, because the results show that the model can be replicated and that it is possible to have a significant impact on the environment and climate, while at the same time protecting the world of small-scale, sustainable farming.”

The meeting was also attended by cooks of the South African Alliance Adele Stiehler Van Der Westhuizen and Caroline McCann who, together with Belarusian cook Anton Kalenik and Italians Tiziana Tacchi and Tiziana Favi, cooked recipes from South African communities, a traditional Belarussian dish and several Italian recipes using meat from the Slow Food Presidium of Romagnola cattle. The dinner was indeed inspired by Slow Meat, an international Slow Food campaign that seeks to turn people away from the tyranny of an overworked, hyper-industrialized food system. Slow Meat educates the masses about the faults of cheap meat, the exploitation of labor and livestock, and the excessive consumption of meat.