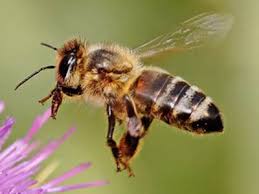 Sarah opened her talk with the phrase “honey is a postcard of the place where it’s from” stating there is a joy in exploring honey.

Historically, the honey bee has been around for 88 million years, compared to homo erectus’ 2 million years, with human speech only developing 155,000 years ago. Originally, there were no naturally sweet foods. Fruit was bitter, think Seville Oranges, and was bred by us to become sweet. So imagine how early humans must have felt when they tasted honey, the only naturally sweet substance available. It is thought that honey interacted with the human brain neurons to help development. Honey represented a high energy, portable food to our ancestors and was probably the first form of alcohol as it has a natural tendency to ferment.

Historically, in all cultures there is reference to “the land of milk and honey”. Honey is a naturally curative medicine. Mesopotamian inscribed tablets of medicinal cures include honey in 30% of the prescriptions. Alexander the Great’s body was preserved in honey to be taken home. Honey was also an important and valuable trade commodity and, later together with beeswax, was used as a form of currency as well as very expensive gifts for royalty.

In ancient time, honey was seen as a gift from the gods, it was nourishing, healing and enriching. All religious texts contain multiple references to honey. It is said that Rameses II tipped 16 tons of honey in the Nile as a gift to the gods to protect Egypt. Egypt was a massive producer of honey at that time and the court officials who looked after the bees were the highest paid and most revered. The Egyptians were the first to domesticate the honey bee. It wasn’t until the 1700’s that it was discovered that bees pollinate plants.

Most honey available today is pasteurised by heating to very high temperatures, blended, usually with added sugars, and made in factories rather than hives and is one of the most adulterated foods available. Alarmingly, honey is now an ingredient in honey! So how did this happen? Due to food shortages during WWII, mono-cropping was encouraged. Most honey available in the UK at that time was clover honey which was very bitter. During the 1940’s clover honey started to be processed to make it more palatable. There is now a standard for the colour of honey, its viscosity and taste. According to Sarah, blended, processed honey should be labelled as “honey flavoured syrup”. In the UK only 14% of honey sold is made by bees in the UK.

Raw honey is not heated and undergoes very little processing. It is cold-filtered to remove debris and bits of pollen. All raw honey is anti-bacterial, anti-fungal, anti-viral, antioxidant and anti-inflamatory. Manuka Honey was a great marketing campaign, it has no more curative properties than any other raw honey. Honey is, naturally, a seasonal and local product.

Slow Food is the only organisation looking at the plight of honey, rather than just the bees. Honey bees are not an endangered species, the wild bees and pollinators are. Honey bees are farmed like dairy cows and sheep. Processed honey should be labelled as such to let people know exactly what is in it, how it was produced and to allow beekeepers to sell their raw honey for a real price.

As for wine, terroir also plays a great part in the production of honey. Sarah then lead us through four honeys from the Slow Food Ark of Taste, a catalogue of endangered traditional foods.

Greece – Arbutus, the wild strawberry tree, the most ancient honey on record. It is an autumn harvest honey and is high in antioxidants. It has a very bitter taste which dissolves into sweet berry fruits followed by a hint of coffee and spice.

Tasmania – Leatherwood. Historically the hives were transported to the penal colony. The English bees didn’t survive but the Italian bees thrived. The Leatherwood tree is slow growing and the first flowers don’t appear until the tree is 70 years old! The honey has an unforgettable taste, similar to camphor in moth balls with a hint of spice, unlike the Leatherwood tree flowers which are highly fragrant.

Madagasca – Mokorana. The Mokorana tree is usually used to make charcoal but is now endangered due to deforestation as the trees are being felled to make room for essential oils cash crops. Sarah informed us that bees feed more on trees, bushes and herbaecous perennials than they do on wild flowers, so if you want to save the bees, plant a tree. Mokorana has a sweet and delicate taste.

Cuba – Wild Flower. This honey is made by a stingless bee and not the honey bee. It has been domesticated but on a much smaller scale. It is very labour intensive for the beekeeper as the honey is extracted by hand, individually from each cell in the honeycomb through a disposable syringe. It has a very acidic taste with hints of a tropical fruit salad.

We need to seek out and demand single source, raw honey.