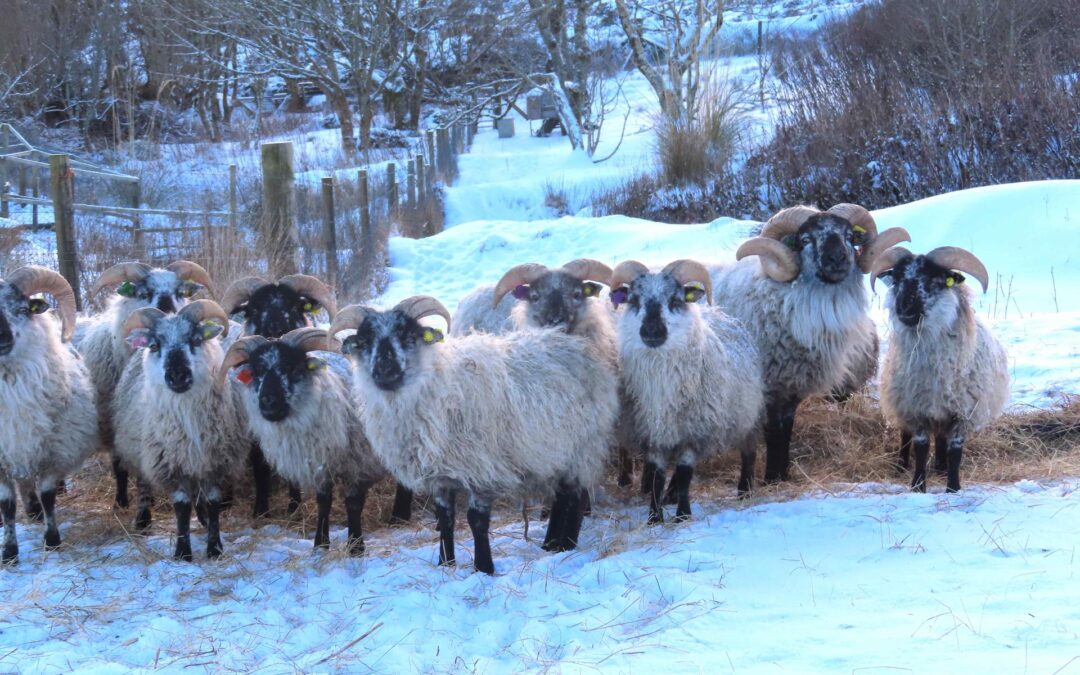 Orkney Boreray Sheep is named the second Slow Food Presidium in the whole of Scotland – the other being the North Ronaldsay Sheep, also on Orkney, the archipelago off the Northeastern coast of Scotland.

Both are primitive small-framed short-tailed heritage sheep but there the similarity ends as they have unique physical appearances and flavours. Unlike the North Ronaldsay, the ancestors of the Orkney Boreray could not access the beach, so their flavours are influenced by rough pasture as opposed to the North Ronaldsay diet of seaweed.

In 1930 the last inhabitants of St Kilda, far out in the North Atlantic, were evacuated, leaving this ancient landrace flock of sheep on the neighbouring uninhabited isle of Boreray. Boreray is virtually inaccessible, but the agile feral sheep survived by grazing on the machair, the typical Scottish island grazing land formed near the coast. Forty years after the St Kilda evacuations, a small flock was helicoptered to the Scottish mainland then by ferry to Orkney Mainland, the major Orkney island. The Orkney Boreray Sheep are the pure-bred descendants of these animals, which found in the Orkney land and pastures a perfect habitat. This very special story is the origin of the other name by which Boreray sheep are known: ‘Lost Flock’.

The Slow Food Presidium supports Orkney farmers who are dedicated to preserving the unique genetic heritage of the Boreray Orkney.

Everything started with the immense effort of Jane Cooper, the breeder who rescued the “lost flock” in the ‘70s. The UK’s RBST (Rare Breeds Survival Trust) in 2017 placed it on a register separate to all other registered Boreray sheep. Fast forward to summer 2021, Jane has established a breeding programme and founded the Orkney Boreray Community, currently with 4 established flocks all born and bred on Orkney. This community is based on common values (commitment to the preservation of the breed, respect for the ethological needs of these animals, the use of agro-ecological practices appropriate to the natural context) and brings together farmers-breeders, but also a butcher, experts in traditional foods, cooks, weavers and craftsmen who work with bones and leather.

Jane says, “The members of the Orkney Boreray Community are both excited and encouraged by the recognition by Slow Food International of our work with Orkney Boreray sheep and the quality of the mutton we produce. This recognition is most welcome and much appreciated.”

Orkney Boreray sheep generally have a cream fleece and grey or black & white face and legs and can have a darker area of wool on the rump. All have a small, slender frame and a double-coat of wool, giving thicker fibres for throws and textiles plus a fine inner wool ideal for making shawls and knitwear. Their meat is delicious and usually eaten as 2-3 years old mutton to allow the meat to mature, available exclusively from Jock Gibson of Macbeths Butcher & Game Dealer.

Sales are being promoted via Scottish Food Guide, Macbeths and local contacts under the Orkney Boreray brand.