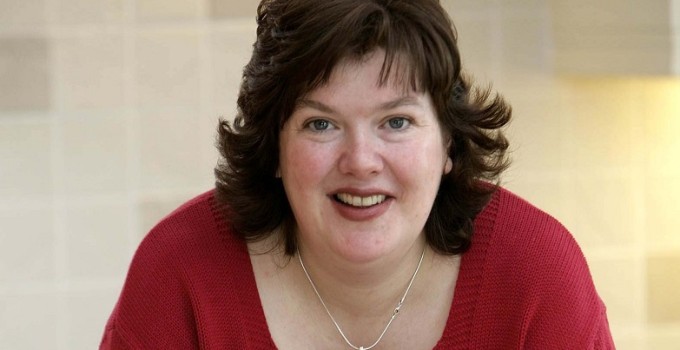 Paula explained that she would be using pork from Seaview Farm in Portrush, a 4th generation dairy farm which recently introduced rare breed pork, Berkshire and Middle White. The pigs are kept entirely outside and the farming methods followed ensure the farm is ranked as carbon negative. She would also be using milk from Chestnutts Farm, also in Portrush, which recently installed a milk vending machine to sell their pasteurised, non-homogenised, milk direct to the public.

Paula demonstrated how to cook Pork Ragu with Gnudie. Gnudie (pronounced with a silent “G”), is a ricotta dumpling, rather like gnocchi. Paula had also made her own ricotta but says the recipe can be made just as easily with shop-bought ricotta. I was so inspired by Paula’s demonstration that I made the recipe, including the home-made ricotta, which can be found on our Recipes page.

When making your own ricotta there is left over whey, which Paula had smoked for the next recipe. If you don’t have a gadget for smoking, use an old roasting tin, lined with tinfoil, add the wood chips, put the whey in a heatproof container without a lid and sit on top of the wood chips. For a less harsh smoke, it is best to soak the wood chips in water first. Set the wood chips alight and cover the entire roasting tin tightly with more tinfoil to let the smoke permeate the whey (or any other item you wish to smoke). She says it is best to do this outside as otherwise your house will stink of smoke for weeks!

Paula’s second recipe is Pork Chop with Smoked Whey sauce. She dipped pork chops in seasoned flour, (seasoned with salt, pepper and mustard powder) and gently fried in butter. Onion and garlic was added and when softened the smoked whey was poured in. The pan was covered and allowed to simmer for 20 minutes. At that point, most of the sauce was removed and blended with a stick blender. Meanwhile, a leek had been prepared by removing the outer leaves but leaving on the root then splitting down the middle. It was first blanched to soften and then put on a griddle to char. Crispy sage leaves, as a garnish, were also prepared by frying in olive oil. She had previously prepared a sage infused oil by adding dried sage leaves to olive oil, heating gently, then allowing to cool.

The pork chop was served with the Smoked Whey sauce on top, the charred leek on the side and sprinkled with the crispy sage leaves and a drizzle of sage oil.

Paula said that she had cooked the Ragu at an earlier demonstration and someone had remarked how wonderful it tasted. Paula explained that it had nothing to do with the way the pork was cooked but rather that naturally matured, rare breed pork tastes so much better than anything you can get in the supermarket.