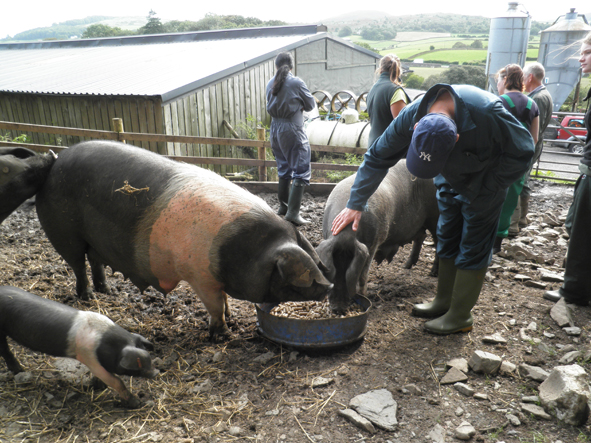 Slow Meat advocates “Eat less meat, but of better quality”, the reason being that the intensive farming methods of modern meat production are a contributing factor to global warming. So in pursuit of this and also dreaming of living a fully sustainable life style I embarked on a one day Pig Keeping Course at Inagh Free Range Farm in Co Clare.

The small group of 8 apprentice swineherds hailed from all over Ireland, some, like me, had no prior experience, others already had their own pigs. However, the one thing we all had in common was the desire to raise and eat our own rare breed pork. We were introduced to Graham and Deirdre Rynne who told us they were registered with the British Pig Association as rare breeders, specialising in Large Black and Oxford Sandy and Black pigs which are both ‘Heritage’ breeds. They are also members of the Irish Pig Society. This means that all the pigs are raised outdoors and are allowed to give birth naturally, without the use of sow stalls or farrowing crates.

The day started off with some of Deirdre’s delicious home-baked sausage rolls with tea/coffee. The pork in the sausage rolls was from their own Large Black breed. For lunch we had roast pork and the most delicious spare ribs I’ve ever tasted.

Graham reminded us of modern farming techniques where the sows are raised in closed barns or confined feeding operations, spending the majority of their lives in gestation or farrowing crates that don’t allow them to get up or turn around. In modern farming, the average sow produces 23 piglets per year, farrowing just over twice per year. After two to four litters, most sows are sold for meat and replaced by younger ones who can produce piglets at a higher rate. Additionally, commercial breeds are faster growing and go to slaughter at 16 to 18 weeks.

In contrast, the Traditional breeds: Berkshire; Saddleback; Oxford Sandy and Black; Gloucester Old Spot; Large Black; Middle White; Tamworth; Duroc; Mangalitza; Landrace; Hampshire and Welsh are more slow growing and will take six to ten months to reach slaughter weight. Graham explained that some breeds were easier to look after than others, they were easier to manage; good temperament; others were more docile; some were better mothers; but he insisted that each breed has its own characteristics and each pig had its own personality.

We then went out to meet the pigs and piglets and were even taught how to use a board to move a pig from one area to another. Some of us were better than others but I had the distinct feeling that the pig knew where she was supposed to go.

Pig keeping itself, is fairly easy, but time consuming as, with all animals, they require daily care. They need a secure space to live, preferring a wooded area to open fields. A double line of electric wire is ideal as pigs can jump over, dig under or crawl between fences. They are also better than any plough if you need some ground cleared and will eat anything. They need their own house to provide shelter from wind, rain and sun – pigs get sunburned too! Obviously they need a fresh water supply and food. Pigs are sociable animals so should never be kept alone, if you’re going to keep pigs, you need to keep at least two together.

Weaner pigs, 8-12 weeks old, are available to buy from many reputable dealers. You will need to register with the Department of Agriculture, Food and the Marine. It’s best to buy them in March/April, raise them over the summer, with a view to sending them to slaughter in August/September. The resulting pork wil be like nothing you’ve ever tasted before as it is almost impossible to buy free range or organic pork in the supermarkets. One thing you will notice is the larger layer of fat – this is where all the flavour lies. You don’t have to eat, but you do need to keep it on the meet whilst cooking.

So, now I know all about keeping pigs, I just have to sell up and relocate to the country to live my dream!