What is a Slow Food Presidium?

The Slow Food Presidia project began in 1999.
After cataloguing the first hundred products at risk of extinction (with the Ark of Taste Project), Slow Food took a step further, entering the world of the production process, to learn about the areas of origin, meet producers, promote their products, skills and knowledge. Over the years the Slow Food Presidia project has become one of the most effective instruments to put Slow Food’s politics on agriculture and biodiversity into practice.

Texts naming and describing the cheeses once made in Ireland’s lush green pastures date back to the 8th century, but the descriptions and names are extremely vague. However, we know that Irish cheesemakers once produced a wide variety of cheeses: Tanag and Grus were hard pressed skim milk cheeses, Faiscre Grotha was a fresh type of pressed curd cheese and Tath was made from sour milk curds. The diversity of the products can also be gauged by the coagulants referred to in old texts: animal rennet, both calf and lamb, was used, but also Irish moss (carraigin) and bog violet (mothan).

In the 1970s an association of artisan producers reintroduced cheesemaking on a small scale in rural Ireland and this soon grew to thirty small dairies. Driven by a mixture of idealism and the need to make a living from their farms, this new generation of cheesemakers drew upon skills and knowledge from all over the world.

Using the same raw materials that served the ancient cheesemakers of Ireland so well, they began to make a diverse range of new cheeses from local, fresh raw milk. Each cheesemaker developed products that reflected their own personalities, experiences and interests; today these cheeses are not only associated with a particular place but with an individual cheesemaker.

Irish specialist cheeses have won international acclaim, but only a handful of the “new traditionalists” still use raw milk in the production of their unique cheeses. The Presidium celebrates the distinctive merits of these cheeses and, by working to protect them for future enjoyment, continue the revival of this island’s cheesemaking traditions.

Unlike many Presidia that concentrate on one particular product with distinctive properties from a specific geographical area, this Presidium covers many different types of raw milk cheeses from across Ireland. The Presidium is made up of eleven artisan dairies that work with their own distinctive style and techniques, but share a common commitment to producing a safe, high-quality product using raw milk from their own cows or goats or milk from nearby herds.

In 2005, the first draft of the production specification was written, laying down rules concerning the management of cattle, the source of milk and the cheesemaking process. The specification states that dairy herds should feed on pasture for eight or nine months of the year; that each batch of milk for cheesemaking comes from a maximum of three milkings; and that the distance between a milking parlor and dairy is minimal. The purpose of this Presidium is to encourage and support raw milk cheese producers throughout the island of Ireland and to increase appreciation for this product. It seeks to celebrate the distinctive merits of Irish raw milk cheese, the environment from which it springs, its artisans and its varied styles of production.

Bellingham Blue
Peter and Anita Thomas are justifiably proud of their cheese and its achievements.
Everything about Bellingham Blue is hands-on. The cheese is made by hand, turned by hand, rubbed by hand to form the rind, and hand-pierced with an expert touch to get just the right amount of rich blue veining.
All the raw milk comes from a single closed herd of grass-fed Friesians. Its flavour is rich and robust; the buttery, creamy yellow is complemented by the depth of taste in the blue. The texture is slightly crumbly and the finish is long and smooth, with a hint of saltiness. 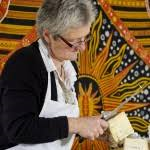 Carlow Farmhouse Cheese
Edam style cheese – made with raw cow’s milk
Our Edam cheese is a mellow cheese and light yellow in appearance. It is suitable for eating any time; at lunch, as a food ingredient, or to complement your cheeseboard. It is a semi-soft cheese. A young cheese at 6 weeks, it can be matured for up to a year and is usually 3-6 months old when sold. A Young Edam cheese tastes very soft, slightly sweet with a mellow flavour. As the cheese matures, its flavour strengthens. Our Edam flavour blends include Edam with Nettle; Edam with Chilli; Edam with Tomato & Basil; Edam with Cumin; and Edam with Black Pepper.

Goat’s cheese – made with raw goats milk
Unlike sheep, our goats have a longer lactation period; similar to dairy cows. Our Goat’s cheese is a Tomme-type cheese made with raw goat’s milk. Tomme is a generic term given to a group of cheeses made in the French Alps, which takes its name from their place of origin, the most famous being Tomme de Savoie. Allow us to introduce our own variety! This cheese is a semi-hard cheese with earthy tones and the distinct flavour of Goats milk. It is versatile in numerous dishes and tastes delicious with fresh or dried fruit and a glass of good red wine. 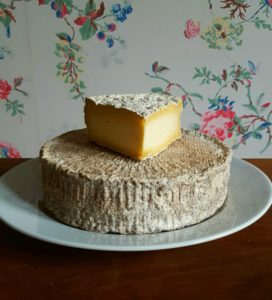 We produce fresh and mature farmhouse cheese from the milk of our herd of pedigree Irish Moiled Cows on our organic farm at Cloonconra, Castlerea, Roscommon.

The ancient Irish Maol breed had only 30 surviving cow in the 1980’s. There are over 1,000 breeding cows now but the breed is still endangered. By buying produce from these cattle you are supporting the farmers who keep them and saving a living part of Irish cultural heritage from extinction. 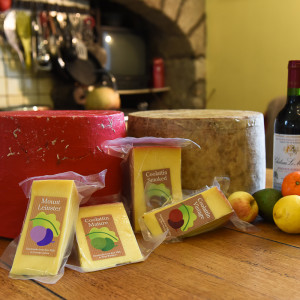 Coolattin Farmhouse Cheddar
Tom Burgess has been producing top quality milk from his pasture fed cows in West Wicklow for twenty years.
He wanted to develop a product which reflected this quality and decided it would be Mature Raw Milk Cheddar. “Pasture to Cheddar the same day”.
“The milk we use to make Coolattin Cheddar is special for a number of reasons, we process in the summer months when the cows are grazing fresh clover-rich pasture only, which is the ideal diet for cheese processing milk. We use early morning milk which is high in melatonin which aids relaxation and sleep. It is pumped directly to the cheese-vat, not stored or pasteurised, thus the natural goodness and flavour is preserved by our traditional cheese-making process. We add beneficial lacto-bacilli and rennet to our milk, the curd is cut, scalded, drained and pitched, milled, salted and mixed by hand. Following this we place in 40lb moulds and press for 2 days. It is then matured over a year at 10°C.”
During this time the unique combination of enzymes& proteins interact to create a gourmet experience of aroma, texture & full flavour which develops slowly from sweet fruit to a full butty note.
To get the best from Coolattin Cheddar, store cool and taste at room temperature. 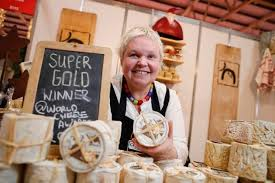 We believe that small is beautiful. Every cheese is made by hand with production not exceeding 10 tonnes per annum between Goats, Sheep & Cows’ milk cheeses.

We collect all our milk from three neighbouring farms using just the mornings milk for our production (Good morning Cows’, Sheep & Goats!). Our farmers agree with us that grass fed animals give the best milk.

Our main outlets are Farmers Market in and around Dublin City, some Delicatessen’s around Ireland, Shops & high end restaurant’s. The finest quality RAW milk from locally grazed herds of Goats, Sheep & cows’ is handmade into hard & soft cheeses, which mature for at least 3 months.

Each of our farmhouse cheeses is cared for individually with lots of subtle flavours and improving with maturity; its natural rind is nurtured being one of the cheeses characteristics.

The only added ingredients are Vegetarian Rennet & salt. Our range of cheeses are hard and resistant, with a long life.

We believe in the slow food philosophy; it takes time for these wonderful cheeses to mature & develop. 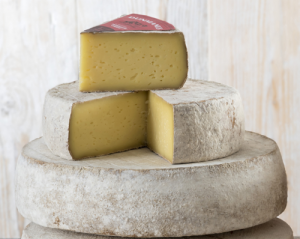 Dunmanus is made from raw cow’s milk. Only the summer milk is used for the production of this hard, aged cheese. The cows graze lush meadows adjacent to Dunmanus Bay where they are washed with the salt laden moist air from the Atlantic. This rich mixed pasture results in wonderful milk – a cheesemaker’s dream ingredient. Using Jeffa’s long perfected cheese making skills this milk is crafted into a cheese that is pressed and aged for a minimum of 6 months in our ripening rooms.
The flavours of Dunmanus Cheese can range from gently sweet and nutty at 6 months, to more savoury, grassy and with a hint of sharpness from 10 months. We call Dunmanus a table cheese in our own house, by this we mean we keep it on the table or kitchen counter (we don’t keep it in the fridge) and we use it for everything – Ploughman’s style lunches, fantastic cheese on toast, melted in gratins, grated over pasta – the works! 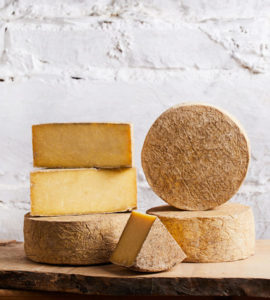 Eamon Lonergan, one of our truly great Irish cheesemakers, makes the cheese for Sheridans on the farm. 15 Fields Cheddar is made with raw milk, cheddar cultures and vegetarian rennet using the traditional Cheddaring process. The day after the cheese is made it is sent up to Sheridans warehouse at Virginia road station. Maturation takes place in the warehouse under the watchful eye of Mark Booker, warehouse manager. Over the months the cheeses are turned and washed in this microclimate until judged ready to release. 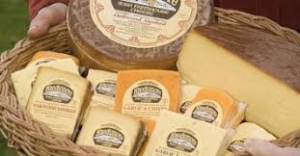 Knockanore Cheese is handmade on the Lonergan family farm in County Waterford, Ireland, using raw milk from their pedigree herd of Friesian cows. The Lonergan family have been farming in the lush rolling countryside of Knockanore for over 60 years. The cheese is a hard-pressed, mature farmhouse cheese made in the cheddar style, with a subtle flavour and creamy texture. 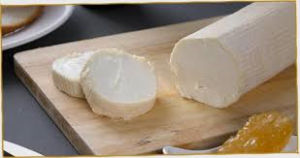 St. Tola Irish Goat Cheese is known as one of the premium artisan products in Ireland. It is the finest, gourmet goats cheese and has been hand-made in the townland of Inagh just south of the Burren in County Clare since the early 1980s.
The cheeses were originally made by Meg and Derrick Gordon who developed the fine quality of the cheese and helped establish a gourmet cottage industry in a rural area. In the late nineties, they were keen to retire and the business was taken over by their neighbour Siobhan Ni Ghairbhith in 1999.
Over time Siobhán and her dedicated team have made significant developments to the family farm. Siobhán has developed the business from a local industry to an internationally recognised brand. Our cheese is still hand made in small batches however as the artisanal quality of our cheese is paramount. 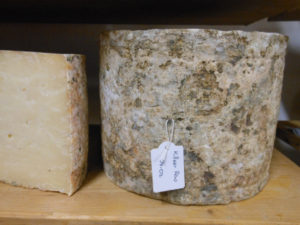 Killeen Farmhouse Cheese
We produce a raw milk goats cheddar. It is traditional in every way. Not only is it made with raw milk, but it is also cloth wrapped. This is a natural way of protecting the cheese, but it does let the natural yeasts and moulds influence the flavour. 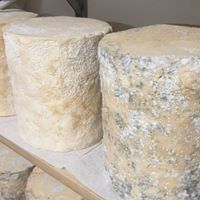 Young Buck
We are creating a new tradition of artisan cheesemaking in Northern Ireland, using single herd raw milk from award winning fresian cows, who spend their days eating the finest grass Norn Iron has to offer. Trust me I tried some…

Young Buck is our headline cheese, it is a mellow blue with a text and texture of white chocolate, with a blue zing to finish.

Join a network of a million activists across more than 150 countries.
Support more than 10,000 projects protecting biodiversity.
Defend Good, Clean and Fair food for all.