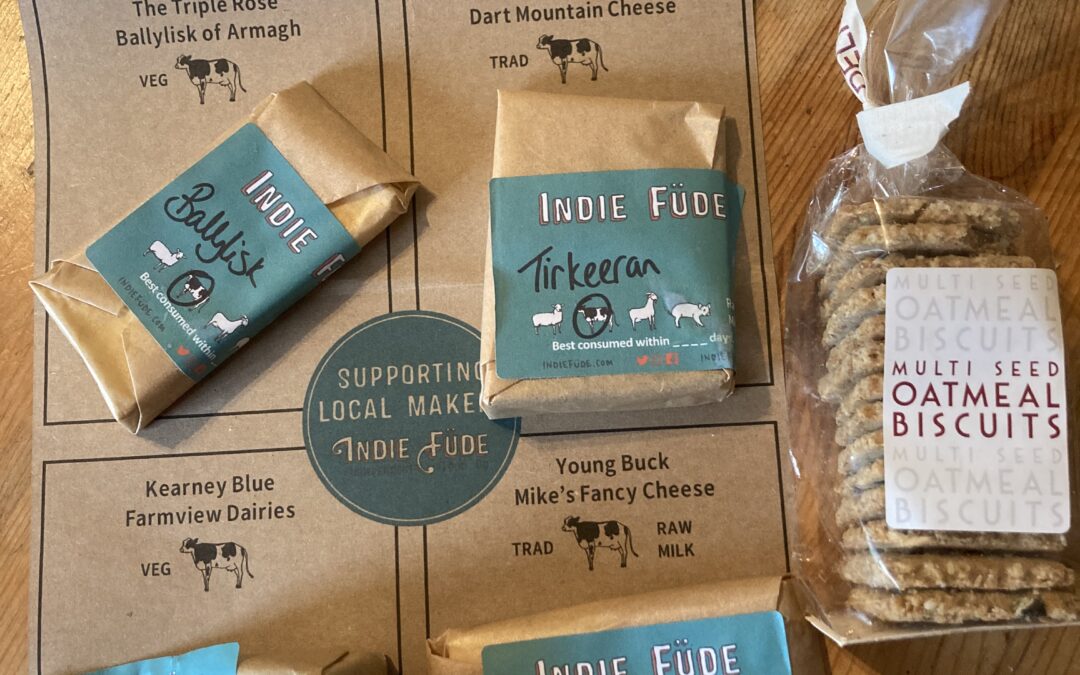 Moderated by Paula McIntyre hosted by Jonnie and Laura of IndieFude.

Tirkeeran from Dart Mountain Cheese is made by Julie and Kevin Hickey. It is a pasteurised, cow’s milk cheese made in the Alpine style but can be used as a substitute for Parmesan, although it is not as hard as Parmesan as only matured for 7 months. Jonnie informed us that the Hickey’s were the only local cheesemakers that trained in the French Alps. Tirkeeran has a sharp but creamy taste. Paula informs us that it very good in fondue has also has a slight nutty flavour. This discussion then sidelined into the virtues of fondue and Jonnie revealed that IndieFude would soon be starting “Fondue Fridays”. After the discussion on fondue I think everyone is planning a fondue this weekend!

The Triple Rose from Ballylisk of Armagh. The Wrights have farmed the land at Ballylisk for five generations, but Dean Wright is the first generation to make cheese. The Triple Rose is a pasteurised, single herd cow’s milk Brie style cheese with added cream. The taste is very rich, creamy and decadent. For me, it definitely has the Wow! Factor and although it is recommended not to keep this cheese in the fridge, I can’t imagine anyone buying this cheese and not scoffing the lot in one go, so no need to keep if in the fridge! Paula informed us of a chef who sliced the top off the cheese, flamed it with a blow torch, called it a savoury creme brulee and served it with apple and beetroot – sounds divine! She said it would also pair well with a sharp apple, even as sharp as a cooking apple.

Our last cheese may not be a stranger to you – Mike Thomson’s Young Buck. A Stilton-style blue cheese made with raw cow’s milk. Young Buck is included in the Irish Raw Milk Cheese Presidium. Jonnie says it is one of the best sellers at Indie Fude as well as being included on menus all over the island of Ireland, as well as the UK and Europe . For a blue cheese, it is not very strong, it is creamy and smooth and has almost tropical notes, being slightly spicy in the blue itself. John & Sally McKenna said with Young Buck Mike Thomson had “produced what is probably the most significant artisan food in the history of Northern Ireland” – high praise indeed, but to my mind, well deserved.