What do you cook when COVID-19 shuts your restaurant? 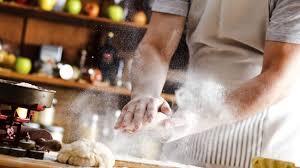 As part of Terra Madre, Slow Food UK is holding Terra Madre Fringe, with various online events. The first event was organised by Slow Food Scotland Cook’s Alliance to discuss what they did to keep the humanity in hospitality during the pandemic.

First up was Peter McKenna of The Gannet in Glasgow. When The Gannet was closed he donated all his stock to a local food bank but wanted to do more, he wanted to keep his staff employed. At first he re-opened The Gannet for takeaway and delivery but that model didn’t work for him. So with the help of crowdfunding he and his team started to prepare meals for the food bank. After lockdown The Gannet reopened but with a different offering, with a smaller number of covers per night. Peter found time during lockdown to keep the relationship alive with the many producers that supply his restaurant and he feels his restaurant should help to reinforce the food network through the farm to fork model.  He believes that farm to fork is not just an idyllic aspiration but a way of keeping food traditions alive.

Giovanna Eusebi of Eusebi Deli and Restaurant, Glasgow said that she felt very fearful at the beginning of lockdown. Like Peter, she also gave away all her food to charity and then started to cook for a homeless charity. They asked her to post on social media and the response took her by surprise. Her customers saw the post and they too started to help, making sandwiches and soup for the homeless. Giovanna has since reopened Eusebi and although she always offered a limited takeaway/delivery of her home-made pasta and ready meals she has shrunk the menu and also revised the packaging so that the takeaway/delivery can play a larger part of her business. On Sunday, she and her team use all the excess food to continue to cook meals for the homeless, thus reducing her food waste. She believes that COVID-19 highlighted how fragile the food system is. Looking to the future, Giovanna is taking each day at a time but hoping when it is over we will have a better world.

Steve Brown works for the Edinburgh Food Social, which is a social enterprise teaching young people and communities about local, seasonal food. He was contacted separately by Peter and Giovanna at the beginning of lockdown, asking what they could do with the food locked in their kitchens. He contacted many chefs and created an informal coalition of organisations, including Slow Food, Nourish and the Edinburgh Food Festival. With the help of crowd funding he and the chefs were able to cook for those who needed it most. They had a three-pillar approach – local, sustainability and dignity. They set up a tiered delivery system. Tier 1 was through their core partners. Tier 2 was community partners to help identify who needed food the most. Tier 3 was direct approach from the public through email or social media who were provided with emergency provisions. Most of these people were signposted where to go for ongoing help, but others became Tier 4 and continued to be provided directly. Having worked for charities, Steve knows how difficult it is to get funding but noticed that since the beginning of COVID funding restrictions had eased and therefore money comes more quickly. This has enabled him to provide a lot of fresh fruit and vegetables and to give people the choice of what they would like to eat, rather than being forced to take a particular meal. People tried new dishes and the feedback was excellent. They ate with dignity. So far he and the chefs have provided 65,000 portions of food.

Returning to Giovanna and how she sees the future. She noticed that during lockdown everyone was making sourdough.

“So they learned how time consuming it is to produce good food, but, more importantly, they learned to appreciate it. Pre-COVID we were running so fast we forgot to taste, COVID has forced us to slow down and appreciate what we have.”